The moment you step on the same block, the smell in the air violently invades your olfactory excitement. Alliumphobics not welcome. (Of course I didn't know that word, I looked it up.)

The dining room is small and welcoming, we feel right at home. It's loud, but not annoyingly so. The ambiance is pleasantly smooth. The Sangria goes down beautifully, both red and white, and it keeps coming. I'm already impressed and nothing has come out yet. The real treasure starts with the bread and garlic aioli spread. The very essence of garlic is deeply infused into the buttery, citrusy topping. I down much more bread than usual. My mouth is already screaming obscenities of intense protest. We’re not used to this intensity, me and my mouth. 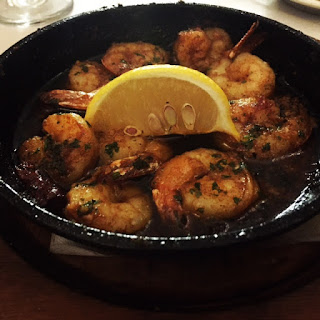 Calamari to die for. I always ensure people that it doesn’t have to remind you of eating a chopped up tire. This dish is buttery and smooth, charred to perfection with a spicy sauce. Luckily I’m here with two other people that love to eat. So the dishes start to come. Tomato basil salad, spinach goat cheese salad, ceviche, garlic shrimp; that should be enough to start to meal. Each dish is unique and thoughtfully refined to perfection. Care and love are prominent here. I haven’t been to Spain yet, but this meal is pushing me and pushing me.  Sangria keeps coming. I’m nearing full and our main dishes are still on the way.

I’m glad my friends like to share. Because the seafood paella is floral and lighthearted and amazing. It’s probably the best I’ve ever hard. And the roasted duck breast with fig reduction is undeniably good. The fig complements the ducks fatty meat to a nice balance of sweet and savory. My grilled yellow fin tuna steak is the worst dish of the night. It’s near excellent.

I think we ordered flourless chocolate cake with homemade caramel and whipped cream… but I’m in a state of hypnosis…deep in my phone looking at flight prices to Barcelona. 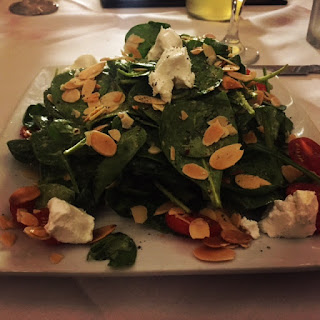 Posted by Unknown at 5:19 PM No comments:

Ever since I moved to New Orleans, people have been raving about both chef John Besh, and his French-German brasserie Lüke. Boasts of grandiosity filled my ears, the best, the epitome of New Orleans. I had to go.
We arrived at Lüke for our 9:00PM reservation and were eagerly greeted and shown to our table. The dining room is engulfed with classic old-world elegance. The room is small, neat and uniquely classy.  Within minutes, a Bufala Negra makes it’s way to my hand. It’s one of the best cocktails i’ve ever had. Buffalo Trace, basil, 20 year Balsamic vinegar, and ginger ale. The Balsamic lends a perfect balance of sweet and tart bringing the cocktail a highly refined character. The subtle note of basil finishes perfectly.
The bread arrives and is disappointing. It seems like an afterthought, something you might get at a generic chain establishment. For a restaurant claiming roots in German and French cuisine, I would expect extreme dedication to the bread. Instead we’re disappointed by mediocrity.
We order a dozen P&J raw oysters and the buttermilk fried quail appetizer. The oysters go down beautifully, a perfect sense of setting. We are obviously within vicinity of the gulf, and that should be celebrated. There is no excuse for bad oysters in New Orleans. The quail is excessively fried and swimming in the essence of honey. The first bites are interesting, but the dish quickly becomes overbearing and palette destroying. We don’t finish the dish between three of us.
The main dishes arrive. The Fresh Gulf Drum, the Shrimp Cavatelli Etouffee, and the Grilled Swordfish. And my real disappointment sets in. All of the main dishes are bland and uninteresting. Although fine and perfectly adequate for a lesser restaurant, nothing is above average. Nothing screams brilliance or magnificence like I would expect from a highly acclaimed chef. The Brussels sprouts end up being the single best thing on the menu (and good they are.)
And this makes me look further and further into how success can cripple. We see it time and time again, a chef, an athlete, etc spreading themselves too thin. Gordon Ramsay has nearly 40 restaurants worldwide is too busy being on television and yelling at people and ends up losing 2 Michelin stars in the process.  Rhonda Rousey is busy making movies and ends up asleep on the mat early in the second round. And Eric Ripert focus’s on Le Bernardin, and consistently and relentlessly maintains his 3 Michelin stars year after year.


Maybe John Besh is spread too thin. Ten or so restaurants, cook books, tv shows, etc etc. But i’m not done. He obviously deserves a second chance. Besh Steak next.
Posted by Unknown at 7:58 AM No comments: