I haven’t spent a lot of time on the West Coast. I didn’t know much about Canlis before I started looking into the Seattle restaurant scene. It’s an unfamiliar place to me. I know a lot more about the food in Japan and China than I do about my neighbors across the country.  But once I started looking, I started to realize just how much the Pacific North West has to offer.  The accolades scream pretty loudly in favor of Canlis. All signs point to a highly favorable experience. But does it live up to its reputation? Is it one of the best restaurants in the country? Have they been able to maintain their world-class reputation throughout the years without becoming stale and boring? Is it the most beautiful restaurant, as it likes to claim? Is it worth the obnoxiously expensive check that comes at the end? I figured I might as well find out.
You pull up to the valet and you can tell that a lot of pride goes into this restaurant. Not an obnoxious, pretentious kind of pride, but the pride of deep passion, of love for ones craft. The restaurant is beautiful. It’s the kind of place you would build yourself if you won that Powerball that you’ve been chasing. This stone and wooded sculpture of a restaurant has massive windows that overlook Seattle. I likely got lucky to visit on a clear day, which seem to be few and far between in the dreary rain soaked town. Outside is great, until you get inside. Stark wooden beams and stone pillars adorn the elegant dining room. It’s somehow incredibly comfortable for how formal it is. We’re greeted immediately and taken to our table. We’re dressed for the occasion. You’re supposed to be. They keep it classy because, once in a while, it feels good to look your best. And it always makes your cocktail taste that much better.

Nine courses of absolute divinity come our way. (Of course we did the drink pairings. Why would you not do the pairings?). We start with an Oyster with Apple and Seawater. Seawater?? Interesting thing to put on the menu, of course it has seawater. No matter, it’s likely the best oyster I’ve ever had in my life. It came with a Narutotai, Ginjo Nama Genshu, “Red Snapper” Sake from Tokushima, Japan. Yum Yum Yum. 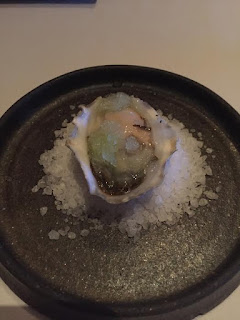 Amberjack with Shiso and Radish, Barley Porridge with Geoduck and Sea Buckthorn, Apples with Foie Gras and Buckwheat, Halibut with Artichoke and Vadouvan, lamb with eggplant, fava, and sheep’s yogurt, it goes on and on with hit after hit. All of the drink pairings seem essential to each dish; it’s hard to imagine the meal without them. The Barley Porridge is immensely interesting. The desert, Chocolate with fig, tobacco, and walnut, is just about as good as a dessert could ever get. 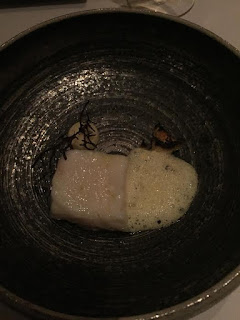 Canlis has set the bar for Seattle. People call it legendary. It’s where couples go for their 50th wedding anniversary. You wouldn’t be surprised to see some billionaire Microsoft exec or the CEO of Starbucks at the next table over. It’s about as classy, dreamy, and romantic of an evening as you can get anywhere in the world. Every detail shines with that passion, that love for life and craft. Does Canlis add up? Is it worth it? You better believe it.
Posted by Unknown at 3:16 PM No comments:

42 grams is an intimate masterpiece. The room is more of a culinary art gallery than a restaurant. Chef Jake Bickelhaupt and dining room manager Alexa Welsh (husband and wife) have created something far beyond special, and it’s obvious when you consider that they skipped one Michelin star and debuted with two, all within their first year on Chicago’s thriving and incredibly competitive restaurant scene. Chef Jake came up in some of the best restaurants in Chicago. He spent time at Charlie Trotter’s and worked at Grant Achatz’s juggernaut Alinea. But where lots of restaurants sit in the shadows of places like these, 42 grams has made leaps and bounds at defining itself as a unique and exciting entity.

I’m greeted warmly and shown to my seat as soon as I walk in the door. There will be eight patrons for this service, a full restaurant. The seats all line up against a counter top, which separates the diners from the kitchen. Every dish is prepared and plated right in front of the dining area.  There are only four total employees. It seems absurd to churn out world-class dishes with so little help. But deliver they do, over and over again, exceedingly well.

The courses come out in well-timed pageantry. Watching the plates grow in tedious preparation by someone of this caliber is a treat all its own. I can’t help but wonder how I can get myself standing there on the other side of the counter next to the Chef. 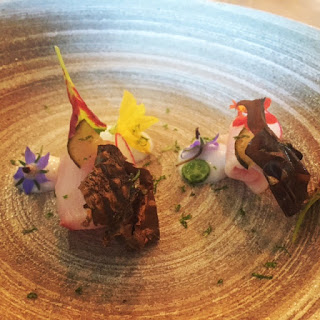 The eleven course seasonal menu is heavily influenced by Asian flavors and techniques while remaining true American fare. It’s luxurious and superb. Dishes like A5 Miyazaki Wagyu with bone marrow, beef tendon, umeboshi, and baby bok choy fall in line with things like Hamachi with tom kha, dulse, and cucumber. The Lamb Neck with eggplant, strawberry, onion, and black miso tastes like a gift from the gods. 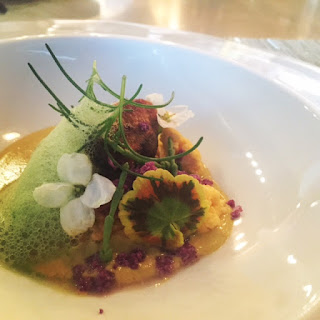 So what keeps 42 grams from joining the ranks of Alinea and Grace with Michelin’s highly sought-after third star? Has it just not been around long enough to prove itself as a founded contender? The lack of a beverage program probably doesn’t help, and the location is in a less desirable part of town. Maybe it’s just too comfortable and casual. Just not quite stuffy enough. It doesn’t really matter at all. All I can think about is when I’m coming back for a new menu.

Most of the complaints I read about the restaurant were surrounding Alexa’s well planned monologues about the history of the restaurant, the food, and the music. “She kept interrupting our conversations,” read one sad review. I think somewhere along the way, you must have missed the point of dining at a place like this.
Posted by Unknown at 1:23 PM No comments: